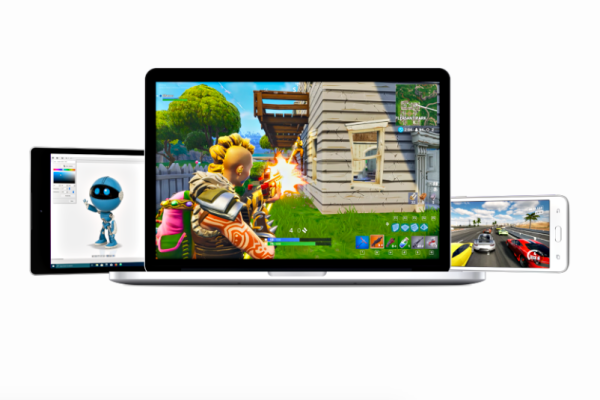 Okay, so this technology might’ve been launched back in January, but it’s news to me and I think it’s pretty cool so here we go. In short, back in 2017 a company called Blade came up with a concept called Shadow, a super powerful Windows 10 enabled PC which users can access from anywhere, from any device connected to the internet. Your old crappy computer can’t handle your games? Well tap into Shadow and your ageing, slow machine essentially becomes limitless. Let me give you a bit of background and explain.

Blade was born in 2015 with an ambitious vision: To create a computer free of constraints. From computers to smartphones, technology attempts to give users more and more power through the smallest of devices, resulting in a limited lifespan. To tackle this issue, Blade placed all the processing power in data centres and took advantage of high-speed internet to end obsolescence and immobility.

After raising more than €60 million from private investors in 2 years, Shadow was officially launched in France in November 2017. In 2018, the international development started in the USA and Europe and pre-orders came rolling in as early as January. By April, Blade was composed of more than 110 employees shared between Paris in France and Palo Alto in California.

Shadow is the first ever high-end PC in the cloud, accessible everywhere using any internet-enabled computer or smart device. Shadow transforms any internet-connected device with a screen into a high-end, full-featured, always-updated and upgraded PC.

Made for a generation that is bucking the concept of ownership, Shadow frees users from the constraints of physical PC hardware and gives them what they truly want and need: access to a powerful, secure, top-of-the-line computer anytime, anywhere and on any device.

The Shadow technology relocates the most powerful components of a PC into the cloud, so hardware never breaks or becomes outdated, unlocking customers from an endless cycle of spending and upgrading. It brings massive computing power — high speed, low latency, crystal-clear graphics and data security — through partnerships with Microsoft, Intel, NVIDIA, AMD and Equinix.

Most importantly, Shadow is powerful enough to meet the demands of serious gamers, allowing them to trade their bulky, loud, hot gaming computers for a hardware-free gaming experience.

“A revolution is coming to the PC that will replace it with nothing – no hardware, no upkeep. Shadow is the only computer you will ever need again,” said Asher Kagan, president and co-founder of Blade. “Shadow allows you to break free from hardware with the power and security you expect from a high-end PC.”

An extremely powerful, full-featured Windows 10 PC, Shadow is always at the cutting edge of technology and safe from hardware failures due to its cloud approach. Although I’m not directly advertising this product, I think it’s great, so here are the credentials:

And should you wish to access Shadow, the entire concept centres around eliminating the need for expensive upfront purchases, therefore Blade offers this via a subscription service starting form around $35/month with commitments ranging from one year, to none at all.

Users can access Shadow on any desktop PC, laptop, Mac, tablet, smartphone or smart TV with the dedicated Windows, MacOS and Android apps. However, for those of you who absolutely need to have a physical piece of PC hardware to attach to a monitor, the Blade team has also developed a sleek, small box featuring ports and an AMD Accelerated Processing Unit enabling real time decoding in 1080p at 144Hz or 4K at 60Hz. These guys think of everything.