Coppersaurus: A look at the UK’s prehistoric digital infrastructure 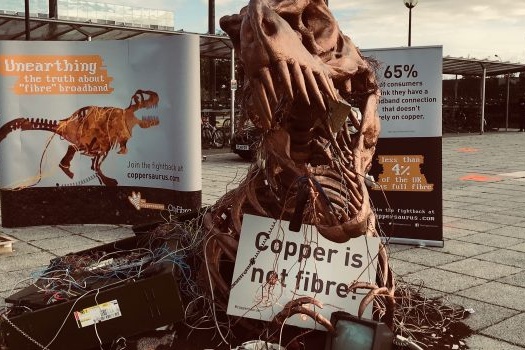 According to new research, the UK’s creaking copper telecommunications infrastructure is holding back our ability to keep pace with modern working trends and putting us at risk of falling further behind our global rivals.

Over three quarters (78%) of UK consumers feel slowed down and frustrated by their internet connection, with the figure rising among homeworkers (82%) and young people (87%). As the school holidays prompt many people to rethink their working arrangements, almost all those who work from home regularly (99%) agree that a better connection would enable them to do so more often.

While the benefits of flexible working are clear, connectivity barriers are preventing the UK from embracing it – with more than half (56%) saying their current connection prevents them from working from home as much as they would like.

That leaves the UK in a precarious position as it battles to meet the demands of the modern workplace – and workforce – of the future, especially given the higher expectation younger people have of the connectivity they need to get the job done. According to the research, 87% of 16-24 year olds felt slowed down by their internet connection, compared with 71% of those aged 55 or older.

CityFibre – who commissioned the new survey of almost 3,500 UK residents through Censuswide – is launching a new campaign, drawing attention to the issue by exposing the outdated infrastructure lurking beneath the UK’s streets. The fibre challenger has ‘unearthed’ what has been dubbed a ‘Coppersaurus’, while digging trenches for new full fibre connections in Milton Keynes – a symbol of our prehistoric copper-based telecommunications infrastructure.

Greg Mesch, chief executive, CityFibre, said, “For too long the UK has been held back by a deliberate lack of investment by BT Openreach in fibre infrastructure. Although companies like CityFibre are building the networks that will give millions of homes and businesses access to full fibre broadband, providers continuing to advertise copper-based connections as ‘fibre’ is leaving people completely confused about what is on offer.”

“With the way we work increasingly blending our home and work lives, it has never been more important for people to understand what broadband connection they really get at home. Years of misleading advertising have made this near impossible, which is why the rules must be changed now – this cannot be allowed to continue indefinitely. It is time everyone knows the reality of what’s under our streets.”

This research highlights the effect of outdated copper infrastructure, as the country slips to 35th in global internet speed rankings – slower than Madagascar.

This, combined with the confusion stemming from Advertising Standards Authority (ASA) guidelines that permit broadband adverts to describe copper-based connections as ‘fibre’, risks undermining the ambitions set out by the Government for all homes and business premises to be connected to full fibre by 2033.

As part of this campaign for a change in the rules, CityFibre is taking the ASA to Court, disputing its conclusion that ‘fibre’ is not a misleading term in broadband adverts when used to describe copper-based connections.