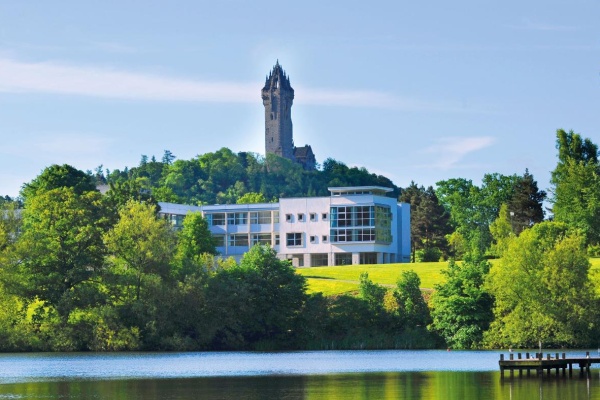 APT & Schneider Electric have come together to deliver a resilient data centre power upgrade to the University of Stirling.

Set in the shadow of the Ochil Hills, the University of Stirling’s magnificent 330-acre campus encompasses a loch, a golf course and the 18th-century Airthrey Castle. The university was founded by Royal Charter in 1967 and is located two miles from Stirling – a city which is dramatically positioned at the country’s geographic heart where Highland meets Lowland Scotland.

Alan Richardson, Infrastructure Development Manager at University of Stirling says: “Infrastructure IT underpins all the operations of the institution.” His team of 12 server, storage and network infrastructure specialists ensure the availability of a range of business applications to support staff and students, from finance and estate services, to email and the library.

The University of Stirling has recently consolidated from three data centres to two by outsourcing some applications to the cloud. Whilst this has increased resource utilisation within the two remaining data centres, planned development of the IT strategy means that rack space is now at a premium to accommodate new services, platforms and equipment. The university currently hosts around 590 servers which are 84% virtualised.

The availability of IT services is mission critical as any outage would leave the university’s 14,000 students and 2,000 staff unable to do their work. There are reputational issues at stake too, IT services must be available to not only attract and support an international community of students located around the globe, but also to increase Stirling’s standing as a top notch research university.

Alan Richardson is a pragmatist, he says, “The supply of power is the biggest issue because if you lose power to your data centre, there’s not a great deal you can do about delivering services.”

The university campus has had significant power outages in the past, although nothing lasting longer than an hours’ duration during the last 15 years. In recent years, the estate services team have dramatically improved the substations serving the campus. While this has generally helped increase the availability of the data centres, short power losses and brownouts were still being experienced.

At the same time, aging data centre power infrastructure equipment had been recognised as a potential problem. While university IT services have never suffered a complete outage thanks to the effectiveness of redundant, distributed IT systems, some of the power equipment had become unreliable and there had been occasional damage to IT equipment.

For Alan Richardson, this meant additional work to ensure the ongoing reliability of equipment and services. However, the team has struggled to schedule time for a complete overhaul of the UPS systems. Alan Richardson continues, “We realised the longer we left replacement, the more we increased the chance of having an outage from which we wouldn’t recover.”

Following a professional evaluation of the power protection system the project team had concluded that replacing the distributed UPS with a centralised, room-sized UPS solution would require too much disruption to the existing power train, be expensive to implement and not necessarily guarantee any tangible benefit in terms of increased availability or efficiency.

Having established that a like-for-like replacement was the best way forward, a member of the infrastructure team did considerable research into UPS market to gain an understanding of which units would provide the highest level of power protection and runtime according to the u-space allocated for the equipment. Once the university had agreed to fund the upgrade, a tender was issued.

“What we really needed was a supplier that categorically understood they would be working in a live environment,” says Alan Richardson. “The key thing for us was to find a company with the knowledge and experience to be able to undertake the work to replace the UPS in a working data centre without any interruption to services.”

“Replacing the power equipment on live services is difficult because even a simple mistake can cause an outage. All the university IT devices are dual power corded, so in theory you can replace the hardware on each power path separately while keeping things continuously powered. However, in racks where the wiring has evolved over a long while, the possibility of accidentally disconnecting both power sources simultaneously is greatly increased.”

The tender document included a detailed specification and was issued on a framework which included eight potential suppliers. In all, the university received four responses to the tender and set about evaluating which of the bidders had convincingly answered specific questions indicating how they could meet the exact requirement.

“Right from the outset APT provided convincing responses,” says Alan Richardson. “Our technical staff were quickly satisfied that APT knew what they were talking about. And they were even more assured after our first meeting.”

John Thompson, sales director at APT comments, “We know the intricate details of replacing single-phase UPS in racks in live data centresbecause we’ve done it many times. Our approach to demonstrating our experience to the University of Stirling was to tell the story of how we’ve done this type of project at universities throughout the UK.”

One of the features of the tender was that the university specified four dates for the phases of the implementation. These dates coincided with quieter times on the campus including mid-semester breaks and before and after the winter vacation, when traditionally there is a lower demand on the system. APT was not only able to meet these timings, they were confident they could exceed them.

Over the four phases of the upgrade, APT installed a total of 44 x APC Smart-UPS Online UPSs in the university’s two data centres. This included a mix of 4.5kVA units to protect communications equipment, and 6kVA UPS to protect servers and storage devices.

The implementation went ahead of schedule throughout the period of the project, allowing additional time in hand for the process to be evaluated as it progressed. The entire installation was completed without any downtime in the data centreswhich remained operational throughout.

According to APT’s John Thompson, “We looked at equipment from several manufacturers to meet the exacting power density specification of Stirling’s tender. APC by Schneider Electric rack mounted Smart-UPS Online provided the best fit in terms of the amount of power coverage and runtime it could provide from the fixed amount of U-space available.”

Each scalable and rack-mountable Smart-UPS Online 4U UPS provides the University with 6kWof double-conversion on-line power protectionalso runs in Green Mode, which bypasses unused electrical components in good power conditions to achieve an extremely high operating efficiency without sacrificing any protection to the critical infrastructure.

Every APC Smart-UPS Online solution includes a Network Management Card and APC’s Powerchute Network Shutdown Software as standard. The software further safeguards the University from brownouts with proactive, real-time monitoring of the UPS performance and delivers alerts regarding power issues.

Alan Richardson said, “We’re extremely happy with the insights delivered through the power monitoring system. The installation by APT includes temperature sensors in each rack, something we didn’t have before. These are helping us to mitigate the effects of our aircon system by helping identify emerging hotspots so we can deal with them before they become a problem. This wasn’t part of the tender requirement, but is a very useful add-on.”

Alan Richardson says, “One of my team put a lot of effort into troubleshooting potential problems with the upgrade in advance of APT starting the work. This project is a great example of customer and supplier working together to ensure the exact requirement was met.”