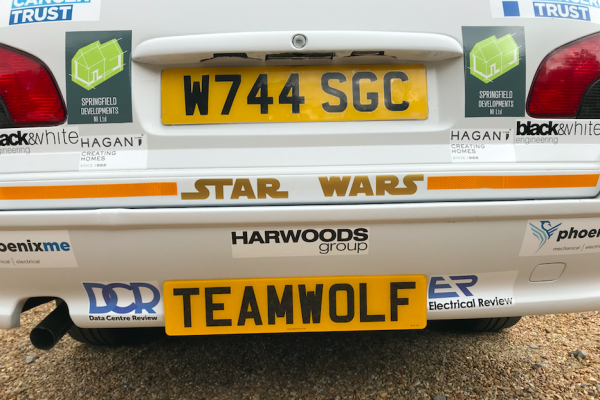 From Margate to Corfu? In a W-reg Peugeot 406 estate? Why, I hear you ask? For the Teenage Cancer Trust, that’s why. This year Heatload and ARC:MC have joined forces to Dumball it across Europe for this amazing charitable cause.

Described as the ‘ultimate driving challenge’, for the uninitiated, the Dumball Rally involves pimping up a car that’s seen better days – in this case the trusty Peugeot 406 – then driving it for thousands of miles on some of the world’s toughest roads, all the while in fancy dress.

In 2017 Heatload drove across India and raised £7,500 for the Teenage Cancer Trust in an ageing Mahindra Jeep. Dave Wolfenden, founder of ‘Team Wolf’ says, “We took part because it was my 50th birthday year, I had previously written a bucket list of 50 daft things to do that year; this included taking part in a charity rally. Dumball fitted the bill.” He’s certainly not wrong.

This year Team Wolf rides again and this time it’s Margate to Corfu in a car that cost less than £500, with 120,000 miles on the clock. Also, none of the team know a thing about cars. What could possibly go wrong?

As for the fancy dress? Naturally Star Wars is the theme. Roger will make his debut as Princess Leia and Dave shall be donning the mask as Darth Vader. The car itself has been turned into an X-Wing fighter complete with R2D2 on the roof.

The team will begin their journey in Dreamland, Margate on Friday the 14th September. The route will take them through France, Switzerland, Austria, Italy, Croatia, Bosnia, Serbia, Montenegro, Kosovo, Albania and finally on Friday 21st they will board a ferry to Corfu.

During 2018, the guys have been raising money by any means necessary. They’ve done boot sales, a pub quiz, and even taken part in a Tough Mudder (which apparently nearly killed them all) as well as a donations bar in the campsite at the Goodwood Festival of Speed.

The team have also raised a huge amount of money through personal donations from friends and colleagues, and a large proportion has come from some very generous companies that have paid to place their logos on the vehicle – which is now essentially a mobile billboard. For the keen eyed among you, you may have noticed the Electrical Review and Data Centre Review logos on there in pride of place. Thanks for the prime position guys!

If you’d like to donate to Team Wolf and the Teenage Cancer Trust, get yourself over to their JustGiving page via the link below:

Fun fact: In order for Dave to fit the rally into his schedule he had to convince his daughter to move her wedding day to December. Thank you Dave’s daughter! What a woman. That my friends’ is dedication.